To bring a bit of festive cheer to an otherwise gruelling year, Moorwand has put together 12 days of payments from 2020 which we think the industry should be proud of.

It’s no secret that COVID-19 has disrupted payment firms’ transaction volumes this year. Particularly those who rely heavily on brick and mortar customers or international travel, as opposed to e-commerce-based merchants. When the UK lockdown began, Revolut saw a dramatic 40% dip in revenues due to its reliance on interchange fees.

But eight months later, and after a number of product pivots and roll-outs, the fintech managed to break even. It proved that despite the turbulence a global pandemic can ensue, the payments industry is resilient and susceptible to change.

Not only this, but COVID-19 has also encouraged a worldwide shift to safer, more efficient, cheaper alternative payment methods. ATM usage is down and card payments are up, prompting the use of cash to decline. E-commerce transactions have boomed, with their processors – such as Stripe, Checkout.com, and Fast – all enjoying big jumps in valuation. And a number of firms have even rolled out open banking-enabled payments initiation (PI) solutions – a more novel way to pay which is yet to experience mass adoption.

As Moorwand’s chief commercial officer, Luc Gueriane, tells Finextra: “[A cashless society] is much safer to monitor payments, cheaper to regulate, and limits the spread of viruses. But most importantly, it keeps pace with constantly evolving technology. Put simply, a failure to go cashless limits innovation in the fintech sector.”

To bring a bit of festive cheer to an otherwise gruelling year, Moorwand has put together 12 days of payments from 2020 which we think the industry should be proud of.

Pay.UK revealed that 2019 enjoyed a record year for transactions. Some 9.2 billion were made, up from 8.7 billion in 2018 – marking a 500 million increase. These transactions included Direct Debits and Credits, as well as Faster Payments – which is essentially online banking and standing orders. The use of cheques also plummeted another 20%, from 346 million in 2018 to 276 million in 2019.

UK Finance announced the increase of the contactless card limit in the UK from £30 to £45. The extension came following a 50% drop in cash usage in the last week of March, as more and more consumers preferred cards to cash, which carried the threat of the virus. The changes, already under consideration by the industry, were “expedited” due to the COVID-19 outbreak.

26 May: ATM withdrawals more than halve

ATM withdrawals fell 60% during the lockdown. Three quarters of UK consumers said in May that their use of cash was down. This seems to be a trend here to stay. In the first weekend of the UK’s second lockdown, the amount of cash withdrawn fell 41% compared to the same time last year. The number of withdrawals also fell by a larger 47%.

29 May: Pay.UK rolls out framework for Request to Pay services

The Request to Pay (RtP) framework forms the message standards, rules, terms and conditions underpinning RtP services. These services will give billers the ability to request a payment for a bill, rather than sending an invoice or a bill. The framework paved the way for the first RtP propositions to emerge. Pay.UK says it involved more than 400 organisations in an open sandbox to develop the framework, marking a huge team effort from the industry.

Now one of the UK’s largest homegrown fintechs by valuation – on a par with Revolut, which also sits at a price tag of $5.5 billion – Checkout.com’s rise this year has been a real success story. The e-commerce-focused payments platform is now considering a US listing according to its CEO Guillaume Pousaz. It has ridden the online shopping boom, which has seen e-commerce emerge as the fastest-growing segment in cross-border payments. McKinsey expects it to grow at 7% between 2018 and 2023.

The solution doesn’t require the customer to have their card number handy, or to have it saved in a browser. In July, these major card issuers had signed up 10,000 merchants to the service over in the US since its launch in 2019. But the UK, along with 13 other countries, are now on its roll-out list. Click to Pay promises a frictionless payment experience for customers and merchants – something both parties want and need after a year of market disruption.

The UK’s HM Revenue & Customs (HMRC) issued a government tender worth £3 million for “Payments Initiation and Account Information Services”. The government plans to kick off the project in February 2021. In the meantime, it has also signed a contract with London-based fintech Judopay. It hopes the latter deal will drive adoption of digital payments in the public sector through the Crown Commercial Service’s (CCS) payment acceptance framework.

The UK’s Financial Conduct Authority (FCA) re-iterated to payments and banking firms’ CEOs that no matter the impact of COVID-19, all companies must “maintain adequate arrangements” when looking after client money. It cited periodic due diligence on third-party custodians and banks, as well as the responsibility of regulatory compliance which comes with outsourced operational function. The warning followed the Wirecard scandal, which had a knock on effect for UK fintechs at the end of June.

According to Retail Banking Research (RBR), the amount spent on global payment cards grew 13% in 2020 to $35 trillion. Its report cited three main drivers for this. One was financial inclusion initiatives in developing countries. Another was hygiene concerns around cash during COVID-19. And the third was a rise of contactless in more mature markets.

13 October: PayPal expands BNPL ‘Pay In 3’ option to the UK

With an incumbent player like PayPal wading into the UK buy now, pay later (BNPL) market, it’s fair to say there’s still huge growth potential in the space – much of which has been created by fintech newcomers. Two thirds of British millennials use BNPL services, and the use of BNPL products in the UK is expected to double by 2023. Some of the most successful in this space include Sweden’s Klarna, America’s Affirm, Australia’s Afterpay and New Zealand’s Laybuy.

In a UK first, Starling Bank became the first of the UK’s neobanks to reach profitability. It signalled a turning point for a sector long criticised for its lack of a profitable business model example. With nearly 1.8 million accounts, £4 billion in deposits and £1.5 billion of lending, Starling managed to make a profit of £800,000 in October. Revolut followed suit a month later, though it did not post profit figures.

2 December: Lloyds Bank is first in the world to connect to Swift GPI Instant

Swift claims that GPI Instant allows consumers and businesses to send payments “in seconds” across borders and “around the clock”. Ed Thurman, head of global transaction banking at Lloyds, calls the service “a game changer in cross-border payments”. The go-live means a remittance payment from anywhere in the world sent to the UK through Lloyds can now arrive in seconds. The news follows a successful pilot earlier with the likes of Barclays, Commonwealth Bank of Australia, DBS, Wells Fargo and BBVA, alongside Lloyds.

Discover more insights from Moorwand by reading our other articles.

To find out more about Moorwand’s Issuing (Bin Sponsorship), Digital Banking and Acquiring – head to our solutions page or get in touch. 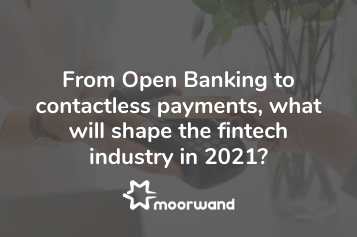 From Open Banking to contactless payments, what will shape the fintech industry in 2021?

2020 has been dramatic to say the least. We can expect this turbulent year to have a longstanding impact with even more drastic change on the horizon. So, what do the next 12 months have in store?

How can fintechs build more trust with users after COVID-19?

As some customers have chosen to move back to familiar, ‘trusted’ financial brands during COVID-19, how can relatively new faces in the market keep and boost their credibility after a year like 2020? 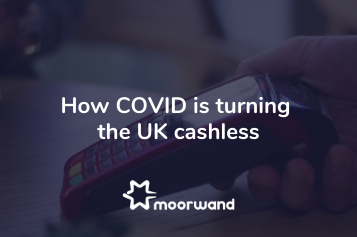 How COVID is turning the UK cashless

Luc Gueriane writes about how moving closer to a cashless society is a good thing for the public and fintechs, and how many programmes (with digital banking) are helping to make banking more financially inclusive.